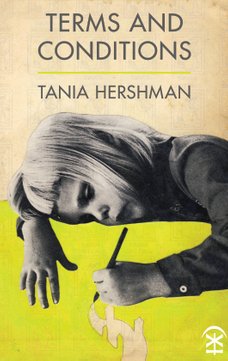 Tania Hershman’s debut poetry collection, Terms and Conditions, urges us to consider all the possibilities, and read life’s small print before signing on the dotted line. These beautifully measured poems bring their stoical approach to the uncertain business of our daily lives – and ask us to consider what could happen if we were to bend or break the rules, step outside the boundaries and challenge the narrative.

In feats of imagination and leaps of probability, falling simply becomes flying, a baby collects the data and scrolls through everything it sees, and there are daring acts of vanishing and recreation. Be wary, for even the evidence here often leads us astray. And in between this, Hershman’s precise poetry elegantly balances the known, unknown and unknowable matter of existence, love and happiness, weighing the atoms of each, finding just the exact words that will draw up the perfect contract of ideas.

‘Tania Hershman’s poems emphasise the humanity and paradox in our civilization of technology and absolutes. Like the airline pilot who wipes down the cockpit window, Hershman endeavours to see, as clearly as possible, the terrain that lies ahead. Manoeuvring easily between prose and verse, Hershman is herself the steadiest of pilots, possessing skill, instinct, integrity and nerve. And though she takes artistic and intellectual risks, she invariably lands the poems safely. This is a sophisticated debut collection by a writer  already well known for her inventive short stories.’ – Kathryn Maris

‘There is a plentitude and a loss to Tania Hershman's Terms & Conditions. A plentitude of tones and forms and linguistic playfulness, and a fine sense of loss that spins and passes through the poems like the neutrinos she mentions in 'Undetected'. I love the collision of the personal and the scientific in this book, the way that the large and small events of life dance a quantum quadrille with language in the light received and emitted by the writer's mind. There's a memorable prose poem – in which a cow grazes peacefully around one of the many World War One craters that pock the earth around Ypres – that hints at themes of catastrophe and recovery, the risks and the rewards of oblivion. There are many more striking juxtapositions and surprises to explore in this absorbing, amusing, and moving new collection.’ – Simon Barraclough

'In her debut collection of poetry, acclaimed writer Tania Hershman reveals the strange intricacies of science and our daily lives. Here, we find a cabinet of curiosities: Elvis and Marilyn, fire ants, cake and wind turbines. Hershman gifts the reader with collisions of grief and laughter, joy and curiosity. A wonder.'

‘'Happiness' as one of Tania Hershman's distilled, perfectly clear poems has it, 'is paint' - both a single lamina and a colourful richness. The 'Terms and Conditions' of her new collection's title are those we live under, whether we want to or not, as we find ourselves poised or abandoned between each other, between nights and mornings, home and far away. Tania Hershman's work is full of brilliant and passionate observations on dreams, falling, names and dancing, they are moving, loving meditations on how we move and love, what it feels like to be alive.’  – W.N. Herbert 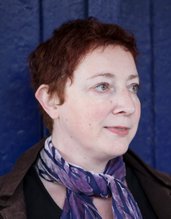 Tania Hershman is the author of a poetry chapbook and two short story collections, and co-author of Writing Short Stories: A Writers' & Artists' Companion (Bloomsbury, 2014). In 2017, Nine Arches Press is publishing her debut poetry collection, Terms and Conditions, and her third short story collection, Some Of Us Glow More Than Others, is published by Unthank Books. Tania is founder and curator of short story hub ShortStops (www.shortstops.info), and has recently completed a PhD in creative writing inspired by particle physics. Website: www.taniahershman.com Twitter: @taniahershman.

Love, sex, boats and friendship. And yet Jo Bell’s second poetry collection, Kith, is about so much more, as these bold and generous poems interweave bigger questions of place, identity and community and what these mean to us, here and now.

Find out more about Kith