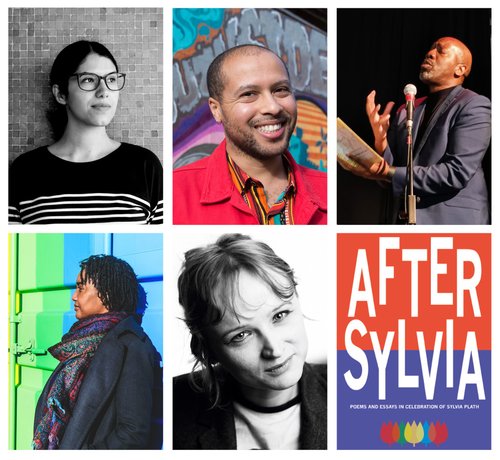 With two debut collections, new poetry books by award-winning authors and an anthology of writing inspired by Sylvia Plath, this autumn-winter announcement forms a list of 14 new books of poetry to be published by Nine Arches Press in total during 2022. This year’s list embraces a range of themes from personal, social and national histories, to new ways of exploring eco-poetics and climate change, to gender and sexuality, mental wellbeing and hope, in poetry books from both emerging and established names.

September 2022 will begin with publication of There is (still) love here, a new collection of poetry by poet and author Dean Atta – a personal and powerful exploration of relationships, love and loss, encompassing LGBTQ+ and Black history, pride and identity, dislocation and belonging. Dean is a Malika's Poetry Kitchen member, National Poetry Day ambassador and LGBT+ History Month patron, and his poems have been highly commended by the Forward Prizes for Poetry and his novel in verse, The Black Flamingo (Hodder Children’s Books, 2019), won the Stonewall Book Award and was shortlisted for the CILIP Carnegie Medal, Jhalak Prize, Los Angeles Times Book Prize and Waterstones Children’s Book Prize.

This will be followed by a debut collection by Sarala Estruch. After All We Have Travelled contains distinctive and moving poems about the many journeys life can take us on – across continents and cultures, through decades of family history, enduring though grief and embarking into motherhood. Sarala’s debut pamphlet, Say, was published with flipped eye (2021) and her poetry has appeared in The Guardian, The New Statesman, The Poetry Review, and Wasafiri. Sarala has received commissions from the BBC, the National Trust, the Brontë Society, and the Forward Arts Foundation.

October will bring a third collection, Living by Troubled Water, by current National Canal Laureate Roy McFarlane – an extraordinary book exploring the legacies of slavery and colonialism, place and displacement, social justice, equality, Black motherhood and family, art, and the healing power of poetry as a witness to our troubled times. Roy is a poet, playwright and former Youth & Community Worker, and is Birmingham & Midlands Institute Poet in Residence, as well as former Birmingham Poet Laureate. His previous collection, The Healing Next Time, (Nine Arches Press 2018), shortlisted for the Ted Hughes Award for New Work in Poetry and the Jhalak Prize.

Nine Arches will also publish After Sylvia – a landmark new anthology of poetry and essays inspired by and responding to the legacy of Sylvia Plath. Edited by poets Ian Humphreys and Sarah Corbett, the anthology will be published by Nine Arches Press in October 2022 to mark the 90th anniversary of Plath’s birth. The anthology will include commissioned poems and essays celebrating Plath and her work, expressing the power and complexity of Plath’s writing and legacy.

November will bring two new titles from writers based in the Northeast of England. Proof of Life on Earth is the much-anticipated debut by poet Degna Stone, which deftly explores human existence – matters of the heart (both the metaphorical and medical kind), of race, the body and self, of life and death. Degna Stone is contributing editor at The Rialto and was awarded a Northern Writers' Award for poetry in 2015. She is an alumni of The Complete Works and Obsidian Foundation, author of four poetry pamphlets and her poetry has featured in anthologies including Ten: Poets of the New Generation (Bloodaxe) and Filigree (Peepal Tree Press), and forthcoming in More Fiya: A New Collection of Black British Poetry (Canongate Books).

Finally, November will also see publication of a new full collection, Bunny Girls, by Costa-winning author and poet Angela Readman, following her 2016 collection, The Book of Tides, also published by Nine Arches Press. This spellbinding new collection mixes myth, wildness and magic realism, drawing on themes of girlhood and womanhood, ageing, anxiety, nature and sex. Angela is also the author of Something Like Breathing (And Other Stories, 2019) shortlisted for The Edge Hill short story prize, and winner of Costa Short Story Award (2013), the International Rubery Book Award, and the Mslexia Women's Poetry Competition.

Nine Arches Press, a regional shortlistee for The British Book Awards’ Small Press of the Year 2019, achieved Arts Council England National Portfolio Organisation status in 2018. As well as publishing poetry, they run two poetry mentoring schemes (Primers and Dynamo), a programme of poetry workshops and live events, and were co-directors, with Writing West Midlands and BBC Arts, of the BBC Contains Strong Language Festival in Coventry in 2021, part of the city’s City of Culture 2021 events.

Jane Commane, editor and director at Nine Arches Press, commented: “We are very proud to have built our list up over more than a decade and grateful for the continued support of Arts Council England and the National Portfolio Organisation programme of funding which has enabled us to grow steadily and continue to support and develop poets at all stages of their careers, whether emerging or established. In 2021, eight of our books were on literary prize shortlists and longlists, including Daniel Sluman’s single window on the TS Eliot Prize shortlist, Cynthia Miller’s Honorifics on the Forward Prize for First Collection shortlist, and others shortlisted for the Polari, Barbellion and Ledbury Munthe Second Collection Prizes. We are over the moon to present these 14 prescient, powerful and thought-provoking new poetry books in 2022 and hope readers will cherish them as much as we will enjoy publishing them”

Subscribe and stay up to date with our latest news at Nine Arches Press: