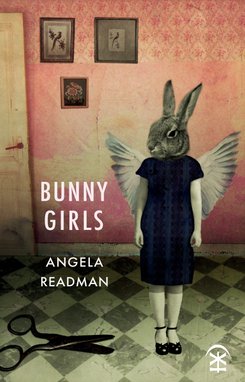 Out of the doll’s house and into the woods, Bunny Girls steps out of the shadows of girlhood and looks at the world with wide eyes. Surreal, spiky, wise and darkly funny, this new collection by Costa-winning author and poet Angela Readman expertly mixes shades of film noir, northern wit, and magic realism. Through the lens of childhood, these poems address autism, anxiety, and darker concerns buried by cultural ideals of femininity.

Here in Readman’s skilful words are odes to severed heads, angels and Disney villains, Marilyn Monroe’s body double, squashed slugs, sexual awakenings, Wendy-houses and snow globes, nosebleeds and blackbirds. Women are both invisible and actively writing themselves into the visible. Where there is isolation and dislocation, its counterbalance is finding breathless, reckless joy in the acts of creation and imagination. At its heart, this enlivening, magnificent book is about darkness and light, the lovely and the frightening, the beautiful and the worrying.

"Heady as a nosebleed, Bunny Girls vacuum packs syrup-sticky snogs, Moomins and the wingbeats of swans. Readers are lured into Wendy-houses and knocked out by fighting fish, platinum blonde wigs and working-class grit. Readman finds playthings everywhere and handles them as seriously as we must. Saucy and daft, her poems pull us out from our bodies to dance it all off under discoballs. Another belting book. The North East is lucky to call this top-notch poet one of our own." - Jo Clement

“Angela Readman is one of our best writers of girlhood and this collection evokes nostalgia and longing for the danger and the glitter of it. These sensuous, beautiful, sometimes surreal poems, take thrilling leaps with a Plathian precision of language. They dive and weave and nod and wink. They also show how a neurodivergent lens can bring a magical perspective to the everyday and re-vision the world so that ‘Walls are rivers waiting to happen’ and ‘The alphabet is a song wiring ‘I am here’ all through your body.’” – Kate Fox

"Angela Readman manages to write poems that exist in a dream place, a place between reality and fantasy where even the most mundane experiences are delivered into something strange and incredible. These wonderful, vivid poems are shot through with vulnerability, a sense of awakening and more - wit, intelligence, a shrewd observation of life - so that the reader feels like they are being shown the small places of significance that the world contains, the profundity of the everyday. Reader, expect to be swept away, carried along in Readman's world, and to emerge like a lamp that has been switched on, bright with the power of the poem." - Wendy Pratt 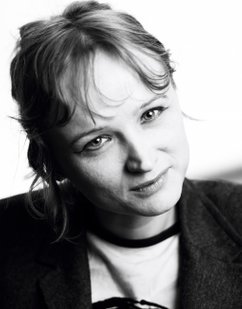 Angela Readman is a poet and story writer. Her poems have won awards including the Mslexia Competition, The Charles Causley Prize and The Essex Poetry Prize. Her short stories have won The Costa Short Story Award, The Mslexia Competition and the New Flash Fiction Review competition. Her story collection Don’t Try This at Home (& And Other Stories) won The Rubery Book Award and a Saboteur Award. In 2019 And Other Stories published her first novel Something Like Breathing. In 2020 she won the Working Class Nature Writing Prize. In 2021 she was awarded a Society of Author’s and Author’s Foundation grant for her story collection The Girls are Pretty Crocodiles (Valley Press, 2022.) Bunny Girls is her second collection with Nine Arches, following her late diagnosis with autistic spectrum condition. She lives in Northumberland.

Angela Readman’s The Book of Tides is treasure trove of luscious, visceral poems that are delightfully risky, utterly thrilling and always close to the bone. Readman’s poetry teems with the rare and beautiful, the dark seaweed sparkle of a particular strand of skewed folklore; here we encounter fishermen and mermaids, a man with a beard of bees, a Tattooist’s daughter, Joan of Arc, and Beatrix Potter’s bed – a rich swell of voices with an irresistible and peculiar power.

Find out more about The Book of Tides