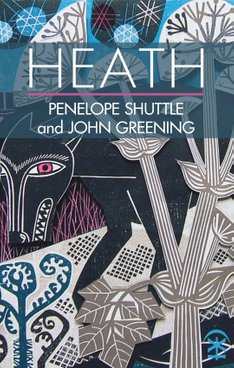 ‘alas, alas for everything

we lost on the Heath’

Criss-crossed with desire-lines and flight paths, Penelope Shuttle and John Greening’s Heath is a wild chorus of poems written in call and response across Hounslow Heath. Through bramble, furze and over wild tracks, we explore the run-out grooves of a rapidly vanishing edgeland that may soon go under the tarmac of the proposed third runway at Heathrow. This is eco-poetry beautifully realised and retold in the form of a contemporary fable, straying from the known routes into the borderlands between the human, natural and the supernatural.

Alone on the heath, under the constellations of aircraft holding patterns, and with only these eloquent, shape-shifting poems as our guide, we encounter highwaymen, witches and ghosts, follow the tracks of the last wolf in England, and find ourselves incanting the heath’s calendar of spells and enchantments. Heath speaks to us, sings its own centuries-old song of seasons; both born and raised in its shadow, Shuttle and Greening’s deep connection of memory to this place brings forth a remarkable cycle of magical and bitter-sweet poems.

"What an impressive, well-researched piece of double-imagination this book is, combining the personal memories of two well-known contemporary poets with a history of the land and townscape in which they both grew up. Read these poems and you will never tread the proliferating wasteland of Heathrow Airport without being grateful for this warm, sprightly, thoroughly entertaining introduction to its rural past."

"Although ‘Hounslow Heath barely exists today’, Penelope Shuttle’s and John Greening’s poems conjure back its lost acres, returning to roots, treading ‘old desire paths’. Their lines, lilting with place names, find room for the Clouded Yellow butterfly, for the Red Kite, for market gardens with raspberries and rhubarb. Heath holds highwaymen, the great planes of Heathrow, the small flight of a bumblebee. Here are poems which dance, which pad beside a traveller, which mimic the shapes of scarecrows on the page. This is a work of love. But beware the ghost with a briefcase – and the Wolf of Perry Oaks" – Alison Brackenbury

‘Heath: one word, one disappeared world, two poets. Hounslow Heath was a place of mystery, danger, fear, wildest beauty; now, among other neatened things, it is Heathrow Airport. In this beguiling collaboration, which finds two significant and ostensibly very different English poets at or near their best, we are taken back to a place we can never have known – though Greening and Shuttle, who both grew up in the area, never completely lose sight of its (and our) present concerns either. The poems are at times lush, at other times stark, and frequently vivid and memorable. This is a substantial book, but I didn’t want it to end.’ 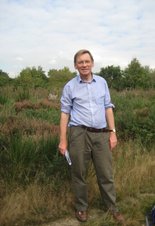 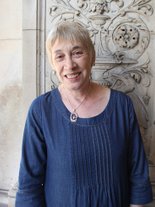 JOHN GREENING was brought up under the main flightpath to Heathrow, but now he and his wife live in Cambridgeshire. Two years with VSO in Upper Egypt resulted in Westerners. The Tutankhamun Variations (Bloodaxe) and a dozen further collections followed, notably To the War Poets (Carcanet, 2013). There have also been plays and several books about poetry. His edition of Edmund Blunden’s Undertones of War (OUP) appeared in 2015, along with Accompanied Voices, an anthology of composer poems. TLS reviewer and Eric Gregory judge, John Greening’s awards include the Bridport Prize and a Cholmondeley. He is RLF Writing Fellow at Newnham College. www.johngreening.co.uk

PENELOPE SHUTTLE was born in Staines in 1947 and lives in Cornwall.  She is the widow of the poet Peter Redgrove who died in 2003. Since Shuttle’s first collection of poems, The Orchard Upstairs (1981), she has published ten further collections. Her eighth collection, Redgrove’s Wife (Bloodaxe Books), 2006, was shortlisted for The Forward Prize and for The T S Eliot Award.  Her work appears in The Penguin Book of Contemporary Poetry and in many other anthologies poems have been published in The Poetry Review, The Manhattan Review, Magma, Stand, The Rialto, The North. With Peter Redgrove, she is co-author of The Wise Wound. Her poetry has also been recorded for The Harvard Poetry Room and broadcast on BBC Radios 3 and 4.  Will You Walk a Little Faster is forthcoming 2017, on the poet’s seventieth birthday, from Bloodaxe. A selection of her work can be heard online at www.poetryarchive.org.uk.

for regular updates about our events, offers and publications.

Gregory Leadbetter's first full collection of poems, The Fetch, brings together poems that reach through language to the mystery of our being, giving voice to silence and darkness, illuminating the unseen. With their own rich alchemy, these poems combine the sensuous and the numinous, the lyric and the mythic.

'His poetry is uncanny in the true sense: a place of unnerving strangeness where you feel finally at home.' -- Luke Kennard

Find out more about The Fetch.