Spake: Dialect and Voices from the West Midlands 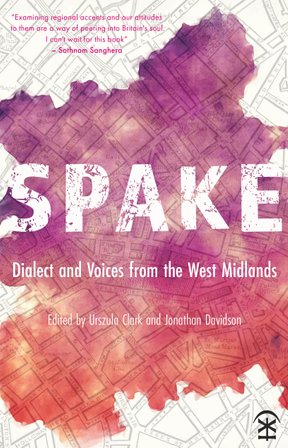 "Examining regional accents and our attitudes to them are a way of peering into Britain's soul. I can't wait for this book" – Sathnam Sanghera

Spake: Dialect and Voices from the West Midlands with contributions from Steven Knight (Peaky Blinders), Julie Walters, Liz Berry and many of the regions best known writers.

Spake is a love letter to West Midlands voice and a challenge the preconceptions and prejudices that abound about dialect and non-standard English.  Much maligned, frequently overlooked or simply left out altogether: the English West Midlands has for decades been diminished in the national conversation - and with it, the rich dialects and voices of the region are often misunderstood, ignored or worse – ridiculed and mocked. But who’s to say that the way we ‘spake’ isn’t every bit a vital and precious part of the landscape as other accents and dialects?

This anthology features contemporary writing that draws upon dialect in ways that explore the potential of the narrative and poetic voice, bringing to life the silent histories and harsh realities of a vanishing working-class way of life in what was once Britain’s industrial heartland. From contemporary re-imaginings of the interwar decades in Steven Knight’s TV series Peaky Blinders to Liz Berry’s prize-winning poetry and up and coming new talent, this book celebrates and gives voice to experiences rooted in the region that have largely lain at the margins.

Abegail Morley's The Skin Diary explore loss in its many forms, with unwavering, fierce and astonishing brilliance. Here are imperfect hiding places, imaginary sisters and near-impossible burdens fill carrier bags and archives. The Skin Diary explores the fragility and strange windfalls of being alive; through tough times and thin ice, these poems are darkly wry, brimming with and alert with Morley's sharp and lyrical lines.