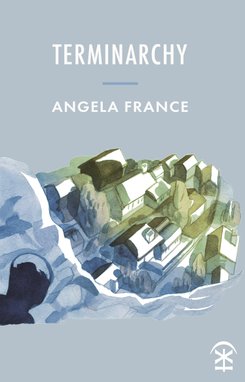 Angela France’s distinctive new collection of poems,Terminarchy, eloquently considers the troubling terms of existence in an age of climate catastrophe and technological change. How do we negotiate a world where capitalism and greed threaten a fragile earth, where technology seems to promise us connection but might also fuel isolation? Where even finding solace in nature reminds us that the seasons can no longer be trusted? How is human urge and want hastening us towards our own ‘endling’ – and what might it mean to be the ‘last’?

In reframing ecopoetics in her own instinctive, radical, lyrical form, France juxtaposes the accelerated, all-consuming speed of contemporary and future times with the ‘longtime’ and ancient, and considers whether, rather than collison-course, there might be a better way to coexist. Where extinction threatens, these wry, alert poems and their eloquent, earthy voices try to find a way through and look for hope.

“‘a voice whispers / at my shoulder Nice place, if you can keep it.’ The sardonic sparrow peering over the poet’s shoulder in these poems has much the same effect the book should have on the reader. Sharp, unflinchingly observational, its dry humour enlivens but never dispels “the shape of something dark” looming ahead. Under cover of a deceptively conversational, witty tone, Angela France conveys the tension of imminent and catastrophic loss.” – Sheenagh Pugh

"Here is a fine new collection by a poet who understands both town and country, her wry observations about everyday life as distinctive as her pastoral visionary moments. Though he might have been bewildered by her keyboards and videos and 4x4s, Edward Thomas would have appreciated Angela France’s sparrows and field gates and ‘water voices’, her quiet attentiveness to the natural world and its ‘desire lines’, whether she’s on a bus or digging the garden. He would also have understood her anxieties – about the environment, especially – and her determination to find the lyrical in time of crisis. Terminarchy catches the mood of a country that has ‘grown past thunder and threat’, emerging from darkness to rediscover what matters, a land where ‘the trees know there is still light’. Beautifully crafted, formally various, these poems offer consolation and considerable musical satisfaction." - John Greening

"An attentive and compassionate sensibility informs these poems. Angela France travels the living world of our fellow creatures with much empathy, considering the survivals, (for now) and the irrevocable losses. Are there fastnesses of the spirit for us? These poems offer us respite but remind us of our responsibilities as guardians of this planet, a task we have sorely failed to take seriously or to love. There is much forgiveness and understanding here, a forbearance which illuminates the abyss of extinction upon which we stand. Richly-developed, her theme demands and rewards our attention. Though the theme is mortal and full of danger, the poems sing, they inhabit delight amid the sorrow. Observational, meditative, earthy, riverine, full of foundational energy; this is a key collection, an essential poetics of gravity and grace." - Penelope Shuttle

“Searing poetic insight into – and beyond – the human mind, and its relationship with nature.  A voyage of discovery along the contours between words and silence, guided by Angela’s muse, her friend Sparrow.  A collection to return to on fire-lit nights.”  – Matthew Oates 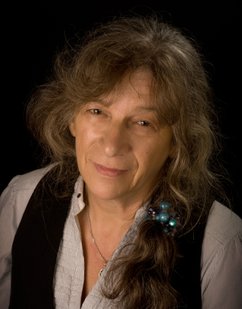 Angela France has had poems published in many of the leading journals and has been anthologised a number of times. Her publications include Occupation (Ragged Raven Press, 2009), Lessons in Mallemaroking (Nine Arches Press, 2011), Hide (Nine Arches Press 2013) and The Hill (Nine Arches Press 2017). The Hill has been developed into a live multi-media poetry show which Angela has been touring, funded by Arts Council England. Angela teaches creative writing at the University of Gloucestershire and in various community settings. She runs a reading series in Cheltenham, ‘Buzzwords’.

Find out more about The Hill