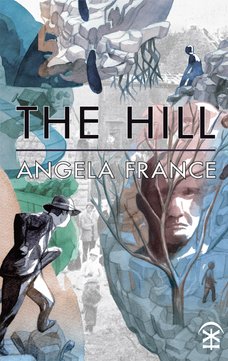 Angela France’s The Hill is a remarkable sequence of poems that leads us up the winding footpaths of Leckhampton Hill near Cheltenham. Under our feet are fossils and flora, bones and the relics of quarrying. France is masterful in capturing the sense of place and weaving the entrancing voices of the hill, its walkers and inhabitants, into the fabric of these formally adventurous poems that range from prose to ‘anglish’, richly worded and delighting in their shapes and sounds.

Here, we encounter ghosts, foxes and ancient kings. We meet the protestors who, years before the Kinder Scout Trespassers, were standing up for their rambling rights and took the law into their own hands in 1902 when a landowner tried to enclose the hill they had walked for generations. And though history is never far from the surface, The Hill raises questions that are just as important today; who has the right to roam, whose land is it, anyway?

“In Angela France’s multiply-layered word-geology of sited memory and belonging, the things of a hill long to still be, to persist. They speak waller and badger. Stone is agent there, its time-strata shimmy and the mine cable cracks, echoing like broken lineage and denial of rights. The path is cut, but re-opened by the rise of feet. In the here and then of ‘The Hill’, in its fissures, are accidents and conflicts over what “land” means: about where a foot can be placed or a line drawn. Then it all swings around a poem rising up on hawk wing. This may be a soft telling where harsh workings are overgrown, where a shadow “might be a huddle of women or a bramble”, but, with a sharp turn of phrase, it can slice your nose, whip a Squire, burn you with the steepness of the morning after or put its long stem-like feet right in the centre of your chest; these are words that make you ache for the place.”  - Phil Smith, author of Mythogeography and On Walking

"The Hill is a place some people own through memories, childhood, intimate knowledge, and others through title deeds. It is a place from which you can be exiled by change and politics, made a trespasser on your own past. Everyone knows somewhere like the Hill, though few could memorialise it with such verbal energy. Exuberant, controlled, angry, elegiac, this is a poetry of landscape, politics, witness." -   Sheenagh Pugh 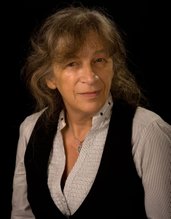 Angela France has had poems published in many of the leading journals and has been anthologised a number of times. Her publications include Occupation (Ragged Raven Press, 2009), Lessons in Mallemaroking (Nine Arches Press, 2011) and Hide  (Nine Arches Press 2013).  She has an M.A. in Creative and Critical Writing and a PhD from the University of Gloucestershire. Angela teaches creative writing at the University of Gloucestershire and in various community settings as well as working for a local charity. She runs a reading series in Cheltenham, ‘Buzzwords’.

In Angela France’s third poetry collection, Hide, what is invisible is just as important as what lies within plain sight. Layers of personal history are lifted into the light and old skins are shed for new; things thought lost and vanished long ago are just on the edge of perception, yet certainties before our eyes vanish in the blink of an eye.

Find out more about Hide