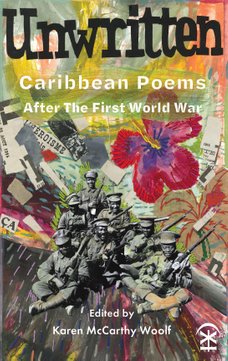 What does it mean to fight for a ‘mother country’ that refuses to accept you as one of its own? Britain’s First World War poets changed the way we view military conflict and had a deep impact on the national psyche. Yet the stories of the 15,600 volunteers who signed up to the British West Indian Regiment remain largely unknown. Sadly, these citizens of empire were not embraced as compatriots on an equal footing. Instead they faced prejudice, injustice and discrimination while being confined to menial and auxiliary work, regardless of rank or status.

As a collaborative project, co-commissioned by 14-18 NOW, BBC Contains Strong Language and the British Council, Unwritten Poems invited contemporary Caribbean and Caribbean diaspora poets to write into that vexed space, and explore the nature of war and humanity – as it exists now, and at a time when Britain’s colonial ambitions were still at a peak.  Unwritten: Caribbean Poems After the First World War is a result of that provocation and also includes new material written for broadcast and live performance.

‘Unwritten offers an answer to the Walcottian question ‘Where are your monuments, your battles, martyrs?/ Where is your tribal memory?’ It took just a few years for the British Empire to erase the role that Caribbean men played in the First World War, a tragedy that has been repeated in the annals of Black people over centuries of European colonialism. Yet the poet’s revenge is the persistent push against such injustice. In Unwritten, the grace, clarity, imaginative invention of poetry, filled with passion, empathy, lamentation and pride, somehow manages to build a monument for those Caribbean people who fought in that war. This is a work of deep and grand importance that has offered the poets the gift of a noble and urgent subject.  The ‘forgotten’ have been restored to memory, just as the poets have been ennobled by the memory of the forgotten. This book is a welcome addition to Caribbean writing of our time.’ — Kwame Dawes

Stairs and Whispers: D/deaf and Disabled Poets Write Back, edited by Sandra Alland, Khairani Barokka and Daniel Sluman, is a ground-breaking anthology examining UK disabled and D/deaf poetics. Packed with fierce poetry, essays, photos and links to accessible online videos and audio recordings, it showcases a diversity of opinions and survival strategies for an ableist world.

Find out more about Stairs and Whispers